Zambia, WHERE WE SERVE 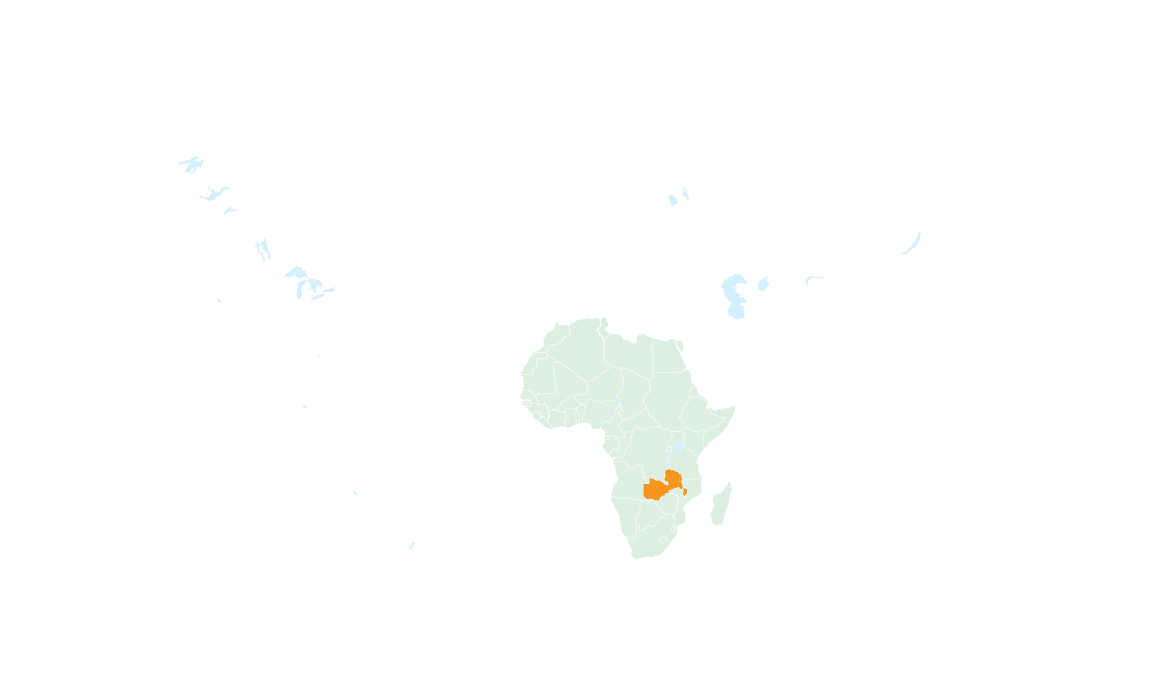 Our ministry serves the people of Zambia and Malawi. Here are a few interesting facts about this Zambia.

ZAMBIA AT A GLANCE

Located in Southern Africa, east of Angola between latitudes 8°S and between 20°E and 35°E, landlocked with 8 neighbors (Angola, Namibia, Botswana, Zimbabwe, Mozambique, Malawi, Tanzania, and Democratic Republic of Congo

Zambia has one of the lowest populations to land ratio’s in Africa. Only about 10 million people in a country half the size of Europe. The employment opportunities in mining and associated industries have caused Zambia to be one of the most urbanized countries in Africa. About one-fifth of the population lives on the Copperbelt and an estimated 2 million plus people live in Lusaka – the capital. This has resulted in massive tracts of uninhabited land across the country.

Zambia’s contemporary culture is a blend of values, norms, material and spiritual traditions of more than 70 ethnically diverse people. During the colonial period, the process of industrialization and urbanization saw ethnically different people brought together by economic interests, This, as well as the very definite influence of western standards, generated a new culture without conscious effort of politically determined guidelines. Many of the rural inhabitants however, have retained their indigenous and traditional customs and values. After Independence in 1964, the government recognized the role culture was to play in the overall development of a new nation and began to explore the question of a National Identity. As a result, Private and Public museums and cultural villages were established to promote the expression of artistic talents.

Dance is an important part of musical expression among Zambians and along with the ideas they express, have served as reflectors of life and thought over the centuries. Many traditional instruments are still played throughout the country, although the desire for western instruments continues to increase. The most common traditional instrument of course is the drum and drumming plays an important part of rituals, ceremonies, celebrations and community communication.

Zambia’s diverse cultures bring with them a wide variety of traditional skills. Crafts can be found in great variety if not in abundance and among them is some of the finest basketry in Africa. The economy of most of the crafts people is based on fishing, cattle or the cultivation of crops. Craft work is often done seasonally to supplement the income of many families. It was originally intended for barter and made according to the needs of other villagers. To many, especially the subsistence farmers, craft work is their only means of earning cash.
Organizations such as Zintu Handicrafts in Lusaka, the Nayuma Museum in Mongu, the Tonga Museum in Choma and the Moto Moto Museum in Mbala, aim to stimulate the production of quality craft work both in traditional forms and where craft work is a contemporary expression of art.

The principle urban centres, Lusaka, Livingstone and the towns on the Copperbelt are where most of the people head when they make the decision to go and look for employment. Those who are unable to find employment, end up living in settlements called shanty towns dotted around cities and towns. But the “shanties” are filled with people who have made a fine art out of surviving with very little. Home industries spring up everywhere from tailors, cobblers, vegetable sellers, money exchangers, to “walking salesmen” selling anything from frying pans, electric plugs and batteries to fruit, vegetables and nuts. For many young people, the countryside may be more open and free but, due to lack of formal employment there, it is a monotonous place to live in compared with the action and energy of the big city.

Depending upon the tribe, some build their houses from mud and thatch, while others burn bricks and build square houses that they paint with individual patterns. Even though life is hard in these remote villages, the villagers are by no means unhappy. Pleasure is taken in simple things and problems are shared. Daily chores are done in groups and often become social occasions. Everyone contributes to weddings and funerals otherwise they would not be affordable. Rural lifestyles are also dictated by the surrounding natural resources. Those in areas near the lakes for example, tend to live a life of fishing. Others will be hunters, farmers and/or honey collectors, all depending on available natural resources.

Tribal customs are only practiced in the rural areas as the urbanized youth aspire to Western behaviour. A greeting is always exchanged before any conversation. If a person approaches you, you should always offer the first greeting. A man should withhold his hand in greeting until the woman offers hers. Gifts are often offered to a visitor as a sign of honour, friendship or gratitude. One should never refuse a gift and accept it with both hands at the same time expressing thanks.
“Lobola” the bride price is still widely practiced and is a token of appreciation to the parents of the girl. In most tribes, the bride is taken to the man’s village the evening before the wedding. Large quantities of food are prepared and home-made beer is brewed to celebrate the marriage. The whole village attends and much singing, dancing and drumming takes place.

There are over 70 different ethnic groups with wide cultural diversity. Interestingly enough however, it is one of the few countries in Africa with very little tribal animosity, and the existence of so many tribes has proved less of a political problem than in many other African states. There are seven main tribes blending together the 70 dialects. There are the Lozi, the Bemba, the Ngoni, the Tonga, the Luda, the Luvale and the Kaonde.

There are more than 20 annual traditional ceremonies in Zambia, manifesting customs, social life, rituals, oral history, material and spiritual culture. They provide a valuable insight to a traditional culture that has been passed down from generation to generation.

Most ceremonies have a deep meaning, in many cases designed to invoke memories of the transformation from childhood to adulthood. Most tribes in rural areas still practice harmless initiation ceremonies for girls that are generally conducted after puberty. Only a few tribes still practice male circumcision initiation ceremonies and those that occur happen in total secrecy.
The open ceremonies that visitors can watch are those that signify ancient times, when new kingdoms were being founded by ancient chiefs and are usually splendid, colourful affairs with much symbolism in their dancing and drumming.

Other important days and festivals:

During N’CWALA festival, held on 24th February, the Paramount Chief of the Ngoni people of Eastern province commemorates the Ngoni’s entrance into Zambia in 1835. Marked by feasts, music and some of the best dancing in the country, the ceremonies are held in Mutenguleni, 15 km (10 miles) south-west of Chipata.

During the KUOMBOKA Festival of the Lozi in the Western province, the Paramount Chief and his family paddle along canals from Lealui to their residence in Limulunga, where they wait out the rainy season.

The Livingstone Cultural Festival takes place in May and at the end of July, UMUTOMOBOKO is celebrated by the Lunda people of Luapala Province.

In July, the LIKUMBI LYA MIZE is celebrated in North Western Province

In September/October on the weekend of the full moon SHIMUNENGA , a ceremony of the Ba-Ita people is celebrated at Maala on the Kafue Flats in Southern Province

The LWINDI Festival takes place in November in Southern Province.

Copyright © 2001 Embassy of the Republic of Zambia and GlobeScope Internet Services, Inc.