Mike and his wife, Melinda, have lived in Longview, TX for 23 years where Mike works as a civil engineer. They have three grown children and just recently, a new grandson! Mike and Melinda are active members of Mobberly Baptist Church where he serves as a deacon and teaches a connect group each week. Mike has a heart for missions and has traveled to Ecuador and Africa multiple times on mission with church groups.

Susan Green is a retired elementary school teacher, having taught 26 years. Two of those years were teaching in Nairobi, Kenya, with the Southern Baptist International Mission Board. She has been involved in Jericho Road ministry since 2013. Susan’s passion in ministry usually involves children. She sees that being connected in Jericho Road Ministries through discipling of adults. If adults are believers who are discipled properly, then they will lead the children, and the generations will know Him.

Eddie ‘Africa Ministry’ Napps is a Native Texan who currently resides in Longview, Texas and works as a business owner and operator and, most proudly, as a chief engineer for his company. Eddie became a Christian at the age of 39 while at the height of his successful engineering career. He had all the successes that life can offer, but he had no inner peace. Through his intense yearning for peace, Eddie attended Mobberly Baptist Church for the first time and heard about Jesus. Soon after, while on a business road trip, he came to the conclusion that he could no longer wait to surrender his life to God. Early one Sunday morning in the dark of night, he stopped at a small random church on the side of the road and went inside the dark interior. He searched around until he found the pastor in his office. That pastor led him to Christ, and Eddie was never the same.

After becoming a Christian, Eddie became an active evangelist to others. In 2003, he went on his first mission trip to Africa to lead a workshop in Lusaka, Zambia to train nationals for one-on-one evangelism. He would be traveling with and serving under three evangelists. However, one of the evangelists dropped out of the trip last minute, and Eddie found himself preaching for the first time to thousands of people. In the course of his trip, he preached up to seven times a day and reached a total of 80,000 people. Out of that number, 50,000 indicated a first time profession of faith professed faith in Jesus Christ. However, as Eddie returned to America, his heart remained burden for these new believers he had left behind in Africa. How would they grow in their faith? Through a recurring dream, Eddie was prompted by the Lord to search out a way to disciple these new believers in Africa. He soon became introduced to a discipleship process, using Emmaus Correspondence courses, that could be used to help nationals grow in their faith and reach their countryman for Christ. The discipleship ministry grew rapidly and today more than 60,000 courses have been studied and thousands of lives have been forever changed with the Emmaus discipleship courses. A partnership began in the country of Zambia. Since then, thousands of new believers have taken part of this ministry. On one trip, Eddie traveled all over Zambia with an International Emmaus Leader trying to find the outer bounds of the ministry and see how far it had stretched. It had grown so far that he was not able to find the end; each time he was told there were more studying the courses “in the next village.” Eddie continues to pour his heart into the African people while still being a full-time businessman. He and his wife Mary have two beautiful nieces, Anna and Betty, who live with them.

Alan Huesing was elected by the JRM Board to serve as Executive Director effective September 1, 2019. Alan comes to JRM with a lifetime of experience in international mission work and cross-cultural education.

He and his wife, Sheryl, served for several years as mission workers in the Philippines, Taiwan, and Mainland China. They also served the public schools of Marshall, TX, as English Second Language teachers. Alan served seven years as a strategist for the North American Mission Board in Atlanta, GA, and for 18 years as International Director at East Texas Baptist University in Marshall, TX.

Alan and Sheryl are members of Mobberly Church in Marshall where they direct the outreach and evangelism program called Engage. They have three grown children – all serving in ministry – and three young grandchildren.

Rev. Dickson Kasongo
National Coordinator
Learn More
I accepted Jesus Christ as my personal Savior in May 1964 at Mpongwe Baptist Church. In early 1965, my wife and I traveled to Chililabombwe in search of employment in the mines. By God’s grace, I was employed, and I was attached to a boiler shop and assigned to the blacksmith section. A few months later, I was proved capable to go for training. After four years of various training, I reached the level of Advanced Mechanic, grade 1 and became a supervisor in that section.

At the same time, I was an active member at Chililabombwe Baptist Church to which I was one of the founders of the Church in 1967. In 1982, I was ordained as a Deacon at the same Church. And the Pastor had gone to Kabwe with a Missionary who was transferred there. I remained the key leader there. Unfortunately towards the end of the year, God started working with me in the area of talking to me about going to the Seminary, because there was now a big need for it. By the end of 1983, I resigned from the mines. The Mines forfeited my benefits because I did not reach 55 years for getting a retirement benefit of reaching 65 years for the pension. But this did not bother me at all. I went to the Seminary happily. Early January 1984, we started our Pastoral training at the Baptist Theological Seminary. Upon graduation, Chawama Baptist Church which we were helping on part-time basis while training, decided to take us on as full-time Pastor. We accepted.

While serving at the same Church, in 1989, there came a ministry called Jimmy Hodges Ministries International. It is an Evangelistic Ministry. We came into a good relationship, and they asked me If I could become their National Coordinator. It also worked well. I had two hats: Pastor and JHMI coordinator.

During wearing these two hats, there came an invitation that there was to be a project to be done in Mangochi, Malawi. In July 2002, we went to Mangochi and joined the American team whom we worked with very well throughout the whole week. At the end, one man by the name of Lee Roy in the American team asked us if it would be possible for him to come to Zambia and work with us. We gave him a positive yes. Then the following year in 2003, he came with a brother in the Lord who was Mr. Eddie Napps. Then I was asked to work with brother Eddie going to different Schools to preach. Our project was successful for the whole week. Then at the end of the program, he also promised to come back the following year. For sure the following year in 2004, he came back with another friend, Jimmy Gillette, who works with Emmaus Bible Way Correspondence School. They came with a new ministry as well called Emmaus Road Trust, which is a Discipleship program. This same year two things happed, I stopped working with JHMI. And secondly, I was asked by Brother Eddie if I can be the National Coordinator for this ministry. I welcomed it. We are still together working well.

Though Zambia has been declared a Christian Nation, it is still in the dark where by some Churches, the only messages they preach are prosperity and miracles. People do not know “who Jesus is and what He did for them,” and as a result, many people live according to the way they want. Many Churches have turned the Word of God into business. We are required to reach even the most remote area.( Luke 10: 1-2) Therefore, my prayer is that God may open a door for people to want to grow spiritually . The other problem faced is Bibles. Many people would want to study, but it is difficult for them to study without a Bible. I wish each family could own a Bible though not every member of the family can have one.

Yours in His service, 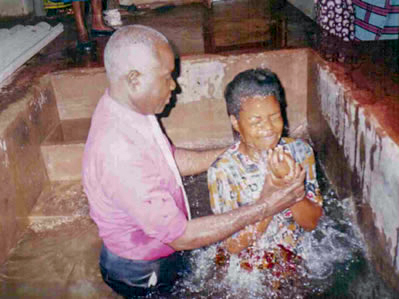 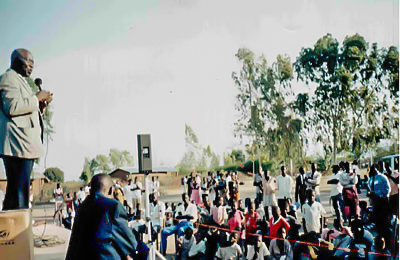 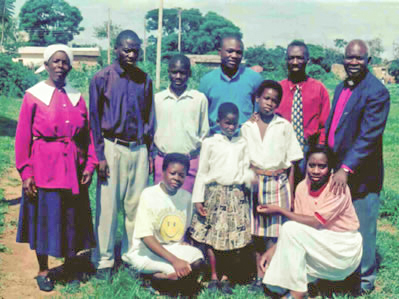 My full name is Mweyama Mulengwani. I am married to Mary N Mweyama. We have a son and a daughter, Kim and Deborah, aged 19 and 18 respectively.

I was born 42 years ago. My dad was not a Christian, but he used to attend a New Apostolic church, which is a cult. I witnessed to him, and he was saved a few months before he passed on in 2012.

The first time I heard the true gospel was 13 July 1993. I was invited to attend church by a friend who was going to a new Baptist church in our town started by a missionary named Joe Thurman. I went and the message touched me, and I believed in Jesus that day. For the first time, I was filled with inner joy. I was baptized and discipled. I started a Bible study on my own and also began to preach Jesus to my friends and neighbors. At church, I was appointed as a Sunday school teacher for 10-year-old boys and that opened God’s call for me to full-time ministry.

In 1997, I enrolled in a bible school, and while training, I was involved in church planting in many villages. I also started pastoring a church in the other part of our town. By 1999, I was called to teach at the new Bible school part time until 2003 when I was called to take up the responsibility full-time. I was called to be an associate pastor in the church where I am now.

In 2004, I met Eddie Napps of Jericho Road. He came to our town to introduce the Emmaus Discipleship process. I was interested. I and my wife joined and graduated. Then we began to pass out the discipleship books. We rose in responsibility from being trainers to area coordinators and now I am helping in the ministry of Emmaus Road Trust as assistant national coordinator in Zambia and also helping our brothers in Malawi with the same discipleship process.

I thank God for my wife for she has been serving with me. Many have come to the saving knowledge and are growing in their faith. My prayer is that God will be glorified in our bodies.

In the photo above my wife is in the middle and daughter Deborah on the right. Our son Kim is in college in Mufulira.